Being present by re-presencing the postdigital trace

This is a three-part, in-progress postaiming to identify meaningful features of culture today how to take a regenerative, symmasthetic approach to studying it. Here are the first and second posts.

Who is driving the car in the postdigital world of today?

The last post suggested that exteriorized human knowledge can be “seized” by machines, that can take that knowledge out of human circulation, or make it hard to find or read. The right to read this knowledge is given to machines, where it is used to train learning models for predictive or analytical purposes. Is this a predicament?

Viewed hermeneutically, a prediction that is based on knowledge of a world, even if it is meant to then shape this world, is a form of mimesis. That is to say, it is already a representation of the world. As it is a representation, the student of culture can attempt to re-presence the trace that went into this mimetic making.


How, when, why was it made? What context did it come from? How does it work? How do parts of it work?

Answering the question will take a recursive leap of faith that takes as its premise that the subject can be understood.

Probably the most difficult part of solving problems recursively is to figure out ow knowing the solution to smaller subproblems of the same type as the original problem will give you a solution to the problem as a whole. You suppose you know the solutions to smaller subproblems and ask yourself how you would best make use of that knowledge to solve the larger problem. The supposition that the smaller subproblems have already been solved has been called the recursive paradigm or the recursive leap of faith. Once you take this leap of faith, you are right in the middle of the most difficult part of the problem. (Epp 1995)

This approach also reveals some of the choices that were made, and bring heuristic complexity to what can appear as innevitability. Why is one choice made and not another? How are the decisions connected?

To re-presence is to bring forth difference interpretations, so also to open up the possibility for exchange and entirely new perceptions and conversations. Further, what may appear “unthinkable” potentially becomes more approachable. 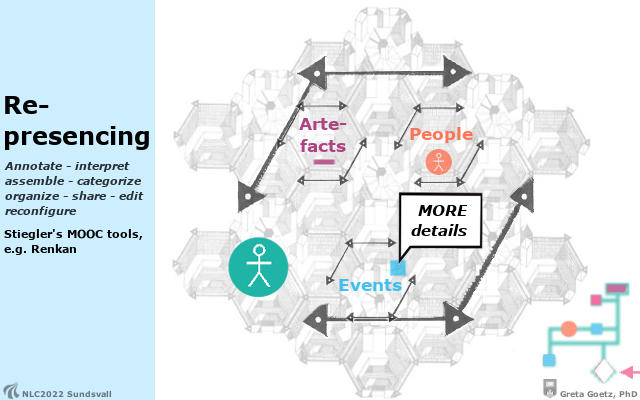 
Re-presencing is also an exercise in history, which is what C.P. Snow suggested as a means by which to overcome the divide between the “two cultures” of the sciences and the humanities. The sciences, as I am writing in a book chapter, have been comparatively far more cross-disciplinary. One example is how linguistics, logic, and philosophy have gone into the knowledge representation used in machine learning.

Above all, to re-presence is a way to Be Here Now, revealing interconnections that include but do not end with ourselves and that begin to go beyond first appearances…

…and possibly towards mathêsis, but that is for another time. I am still figuring out how to blog about this, how much to share, and in which format.