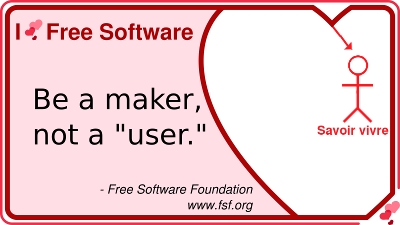 This post is a valentine’s to free software for its I love free software day initiative, which I am interested in from a pedagogical, philological, and philosophical perspective.

How I started using free software
How I have fun using it
Why I love it
Improving it?
Thanks to…

How I started using free software A few years ago, I was working with proprietary software on a proprietary OS, when suddenly, as part of an update, I noticed that all of my data was being sucked up into the “cloud”. As we know, “there is no cloud, only other people’s computers” (get the FSF sticker to share awareness!) There was no prompt asking if I wanted to approve this transfer: it just happened. As a philologist, I thought this was rather bizarre. You can’t just walk into a library and take out books without dealing with permissions and protocols, so why could my data be moved without my permission? I have since come to understand something more about how differently “text” is viewed in the context of digital law. My early thoughts on these problems were articulated in an amateur white paper on the problem of text in digital law, where text now includes code. Once upon a time, I used GNU/Linux when to use it meant knowing basic terminal commands. Although I sadly went on to forget that knowledge, I at least remembered – when I gaped at my data being uploaded into a “cloud” without my permission – that I had other software options. This led to further exploration of all the software packages that are available. Upon returning to a GNU/Linux OS, though still not a free software distro, I felt that I was suddenly seeing in technicolor, and that my life pre-GNU/Linux was like Truman’s experience before he escaped in the film The Truman Show. I began to explore the meaning of free software – and since then, have been trying to climb the free software ladder. Why? Most significant was discovering Emacs, which is so extensible, that I use it for most of my computing. My EmacsConf2021 talk is here and gives an example of how I came to find how free software makes us “makers, not ‘users’”. Note: in that talk, I do use some non-free software like Graphviz and PlantUML. I am seeking alternatives. Vym was mentioned by djatropine on an IRC channel: I have yet to explore it.
⬏

How I have fun using free software There is free software that I have been enjoying for well over a decade: the GNU Image Manipulation Program. I had not fully understood the significance of GIMP as free software at the time and hope to make ammends now. I had fun with brushes and texture packs shared with the community (which I used to find on DeviantArt, in its early days), as well as shared hacks, like how to give photos a retro analog effect. A lot of my learning involved figuring out how to ‘translate’ Photoshop tutorials into GIMP implementations. An example of the images I make can be found in these Networked Learning Conference 2020 slides (Ctrl+F to Goetz). How would I describe the fun I’m having with free software now? Type two fun – which means the kind of fun that can be painful when it is happening, sacrificing ‘ease in the moment’, but when reflected on later brings great enjoyment. What are some examples? Spending hours, days, weeks, trying to learn how to make something; feeling over one’s head; persisting; hacking together something that works “just right” for one’s own purposes. Examples that are not advanced but that would have confounded me a year ago include: learning to create advanced tables in Emacs’ org-mode; figuring out an implementation of homebrew, and setting up software from a repository and dealing with dependency problems.
⬏

Why I love it I love the pursuit of the freedom ladder because I love what free software represents, philosophically – even for the amateur programmer. Seth Kenlon articulated it first (trigger warning: he was talking about open source, not free software – which is different; but, regarding the point I want to make, there is a parallel). Creative design education is more than brand-specific tools. To be creative with software tools is to understand not how to use brand-specific software but to learn the principles behind the software. Because of the extensibility of free software tools and the freedom to implement them in potentially unforeseen environments, using them intensively brings type two fun moments. These moments will prompt better understanding of software in general. That said, free software tools can be used by non-programmers to seamlessly create things: e.g. Emacs for workflow; GIMP for images. Now, thanks to the #ILoveFS sharepic initiative, I’ve also learned of Inkscape for creating SVGs and memes.
⬏

Improving free software? I have no bug reports or code review because this is not my area of competence – yet? But I have some ideas of what I would like to see. Inspired by permacomputing and suckless software principles, could we make a very low-bloat toolset for learning purposes? We have already established that one of the advantages of using free software is that it promotes habits in learning how to learn. So, for example, what would a free software example of a cross section between Reveal.js and a 4K HTML slide generator like Trikita to help with presenting key ideas that track and share our learning?
⬏

Thanks to… While I only joined the free software community recently, there are already more people I would like to thank than I can count or count on listing here. Thanks above all to Richard Stallman for his vision and also his aphoristic expression of what software means, e.g. in Free software, free society and to the Free Software Foundation in general, which understands that reaching freedom can involve a process. I am thankful to former Org-father Bastien Guerry (active when I began my free software journey, and a philosopher as well as a programmer); Emacs’ unparalleled Sacha Chua, Amin Bandali, John Kitchin, PlanetEmacsLife, and the very kind Andrea of moldable Emacs. I am so thankful for the Textpattern programmers and forum members who helped me make just the free software site for my students I wanted, which I wrote about for Educational Philosophy and Theory. I am grateful for Alex Schroeder who is a font of wisdom about wikis, through e.g. his work on the Emacs wiki to mention just one – and also on communication protocols and digital gaming. I really hope to get to know some of the other free software programmers and hope that some of their voices will be part of the book I am writing about postdigital culture and literacy.
⬏